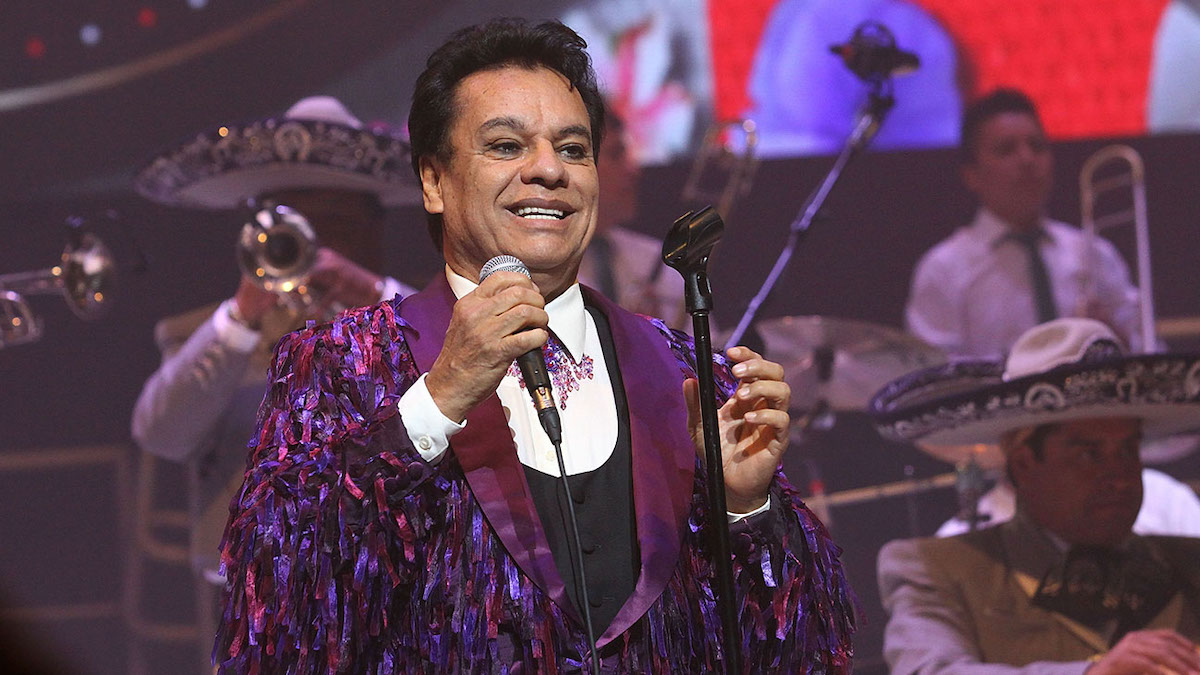 After a difficult childhood, he was admitted to a boarding school.  At the age of 13 he wrote “La Muerte del Palomo,” his first song.

He left that institute at the age of 15 and made a living singing at venues around Juarez, such as the Bar Noa Noa (which he immortalized years later with the song of the same name).

He moved to Mexico City to earn an opportunity to record his first album. Unfortunately, on one of his trips, he was falsely accused of a robbery that led him to be imprisoned for a year and a half in the Lecumberri prison. His time in prison inspired the film “Es Mi Vida” (“It’s My Life.”) His first stage name was Adán Luna. Then he debuted with the song “María la bandida”, by José Alfredo Jiménez, accompanied by the mariachi band of Gil Soledad and his band.

Gabriel began his career recording with Mexican greats including Roberto Jordán, Angélica María, Estela Núñez and César Costa. As he became more successful, he changed his stage name to “Juan Gabriel.” He chose Juan in recognition of his teacher Juan Contreras and Gabriel for his father.

In 1971 he recorded his first hit: “No Tengo Dinero” (“I don’t have any money”). He sold millions of records and recorded in Japanese and Portuguese.

He has recorded songs in genres as diverse as ranchero, ballads, norteñas,  and disco, and produced dozens of albums for Mexican and foreign artists. His fame grew over the years and he became the greatest figure in Mexican music worldwide, performing over 15,000 concerts.

Throughout his life he received countless awards and tributes including 17 Billboard Awards, for artist of the year, album of the year and duet of the year; MTV Music Award for best album; Applause; ASCAP; The Herald; 11 Lo Nuestro awards; more than a thousand gold, platinum and multiplatinum records. He earned his star on the Hollywood Walk of Fame in 2002 and entered the Billboard Latin Music Hall of Fame in 1996. He has successfully participated in Festivals such as Viña del Mar, obtaining Silver and Gold Torches and Gulls. The kings of Spain awarded him the Laurel de Oro award for his career, the prize for Universal Excellence in 2006.

In addition to his artistic career, Gabriel was an iconic philanthropist. He was dedicated to helping children in his country and other places, particularly in his hometown, Parácuaro, in the state of Michoacán, and in Ciudad Juárez, where he lived for a long time and earned the nickname of “El Divo de Juárez.”

According to the Latin Academy of Recording Arts & Sciences, Juan has sold over 100 million albums, and has composed some 1,800 songs. He has also sold the most concert tickets of any Latin artist in the United States.

Throughout his stellar 45 year career, Gabriel released 47 records and helped popularize Mexican regional music worldwide. He further made history by becoming one of the only artists to maintain control of the rights to his songs.

October 5th was instituted as ‘Juan Gabriel Day’ in Los Angeles, California, United States. He has been awarded the keys to the city of Buenos Aires, the Vatican, Madrid and Asunción. His compositions were translated into many languages: Japanese, Turkish, German, French, Italian, Tagalog, Greek, Portuguese, English, among others.

On Sunday August 28, 2016 in Santa Monica, California, Juan Gabriel died suddenly at the age of 66, from a heart attack after giving a concert in Los Angeles the previous Friday, as part of his “MéXXIco Es Todo” (Mexico is Everything) Tour.

Check out the full Billboard article here. New projects include a documentary filmed during Juan Gabriel’s last concert, a television series and feature film, among other things.  Honoring the legacy......
02 November, 2020 / No comment