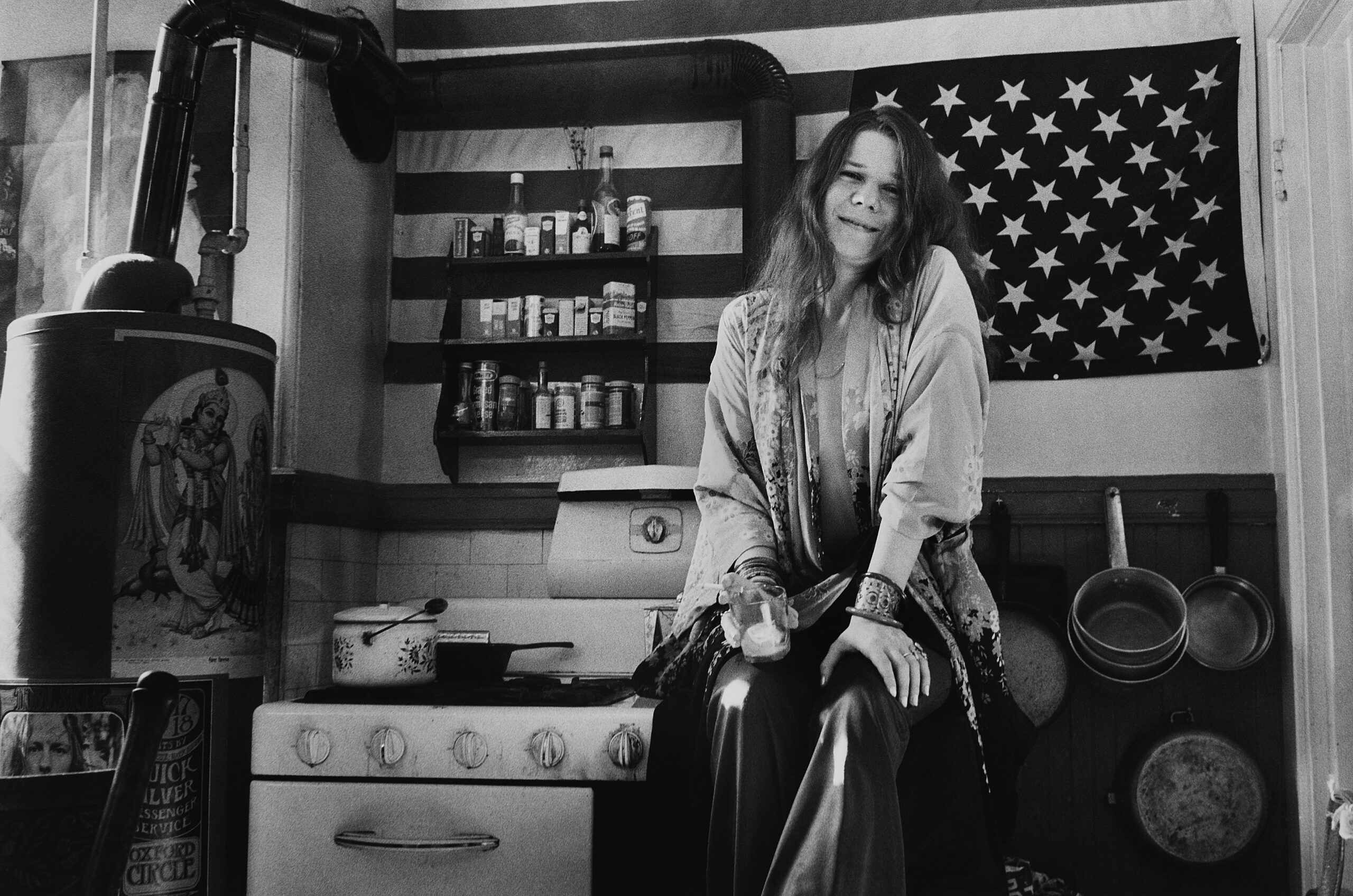 That voice, high, husky, earthy, explosive, remains among the most distinctive and galvanizing in pop history. But Janis Joplin didn’t merely possess a great instrument; she threw herself into every syllable, testifying from the very core of her being. She claimed the blues, soul, gospel, country and rock with unquestionable authority and verve, fearlessly inhabiting psychedelic guitar jams, back-porch roots and everything in between. Her volcanic performances left audiences stunned and speechless, while her sexual magnetism, world-wise demeanor and flamboyant style shattered every stereotype about female artists – and essentially invented the “rock mama” paradigm.

Born in Port Arthur, Texas, in 1943, Joplin fell under the sway of Leadbelly, Bessie Smith and Big Mama Thornton in her teens, and the authenticity of these voices strongly influenced her decision to become a singer. A self-described “misfit” in high school, she suffered virtual ostracism, but dabbled in folk music with her friends and painted. She briefly attended college in Beaumont and Austin but was more drawn to blues legends and beat poetry than her studies; soon she dropped out and, in 1963, headed for San Francisco, eventually finding herself in the notoriously drug-fueled Haight Ashbury neighborhood. She met up with guitarist Jorma Kaukonen (later of the legendary San Francisco rock outfit Jefferson Airplane) and the pair recorded a suite of songs with his wife, Margareta, providing the beat on her typewriter. These tracks – including blues standards like “Trouble in Mind” and “Nobody Knows You When You’re Down and Out” – would later surface as the infamous “Typewriter Tapes” bootleg.

She returned to Texas to escape the excesses of the Haight, enrolling as a sociology student at Lamar University, adopting a beehive hairdo and living a generally “straight” life despite occasional forays to perform in Austin. But California drew her back into its glittering embrace in 1966, when she joined the Haight-based psychedelic-rock band Big Brother and the Holding Company. Her adoption of a wild sartorial style – with granny glasses, frizzed-out hair and extravagant attire that winked, hippie-style, at the burlesque era – further spiked her burgeoning reputation.

The band’s increasingly high-profile shows earned them a devoted fan base and serious industry attention; they signed with Columbia Records and released their major-label debut in 1967. Of course, it was Joplin’s seismic presence that caused all the commotion, as evidenced by her shattering performance at the Monterey Pop Festival, which was captured for posterity by filmmaker D.A. Pennebaker; in the film, fellow pop star Mama Cass can be seen mouthing the word “Wow” as Joplin tears her way through “Ball And Chain.”

Big Brother’s “Piece of My Heart,” on 1968′s Cheap Thrills LP, shot to the #1 spot, the album sold a million copies in a month, and Joplin became a sensation – earning rapturous praise from Time and Vogue, appearing on The Dick Cavett Show and capturing the imagination of audiences that had never experienced such fiery intensity in a female rock singer. Her departure from Big Brother and emergence as a solo star were inevitable; she put together her own outfit, the Kozmic Blues Band, and in 1969 released I Got Dem Ol’ Kozmic Blues Again Mama!, which went gold. That year also saw her perform at the Woodstock festival.

Joplin assembled a new backup group, the Full Tilt Boogie Band, in 1970; she also joined the Grateful Dead, the Band and other artists for the “Festival Express” railroad tour through Canada. Her musical evolution followed the earthier, rootsier direction of the new decade, as reflected in her final studio album, the landmark Pearl. Embracing material such as Kris Kristofferson’s gorgeous country ballad “Me and Bobby McGee” and her own a cappella plaint, “Mercedes Benz,” the disc showcased Joplin’s mastery of virtually all pop genres. The latter song was, along with a phone-message birthday greeting for John Lennon, the last thing she recorded; she died in October of 1970, and Pearl was released posthumously the following year. The quadruple-platinum set became the top-selling release of Joplin’s career and, in 2003, was ranked #122 on Rolling Stone’s “500 Greatest Albums of All Time.”

In the years since, Janis Joplin’s recordings and filmed performances have cemented her status as an icon, inspiring countless imitators and musical devotees. In 1988, the Janis Joplin Memorial, featuring a bronze sculpture by artist Douglas Clark, was unveiled in Port Arthur. Myriad hit collections, live anthologies and other repackaged releases have kept her legend alive, as has the one-woman hit show Love, Janis (which Joplin’s sister, Laura, helped create) and Broadway’s critically-acclaimed musical A Night With Janis Joplin. A documentary film Janis: Little Girl Blue directed and written by celebrated, Academy®-nominated documentarian Amy Berg and produced by Academy®-winner Alex Gibney, is an intimate portrait of the iconic but troubled rock ‘n’ roll singer.

Joplin was inducted into the Rock and Roll Hall of Fame in 1995 and posthumously given a Grammy Lifetime Achievement Award in 2005. But such honors only made official what rock fans already knew: that she was among the greatest, most powerful singers the form had ever known – and that she’d opened the door for countless artists across the musical spectrum.

On November 9, famed vocalist Janis Joplin will have her quadruple-platinum 1971 album Pearl re-released as a box set by Mobile Fidelity Sound Lab,...

Read the full article at People.com This funny, warm and achingly fragile side of the vocal powerhouse is revealed in Janis Joplin: Days & Su...