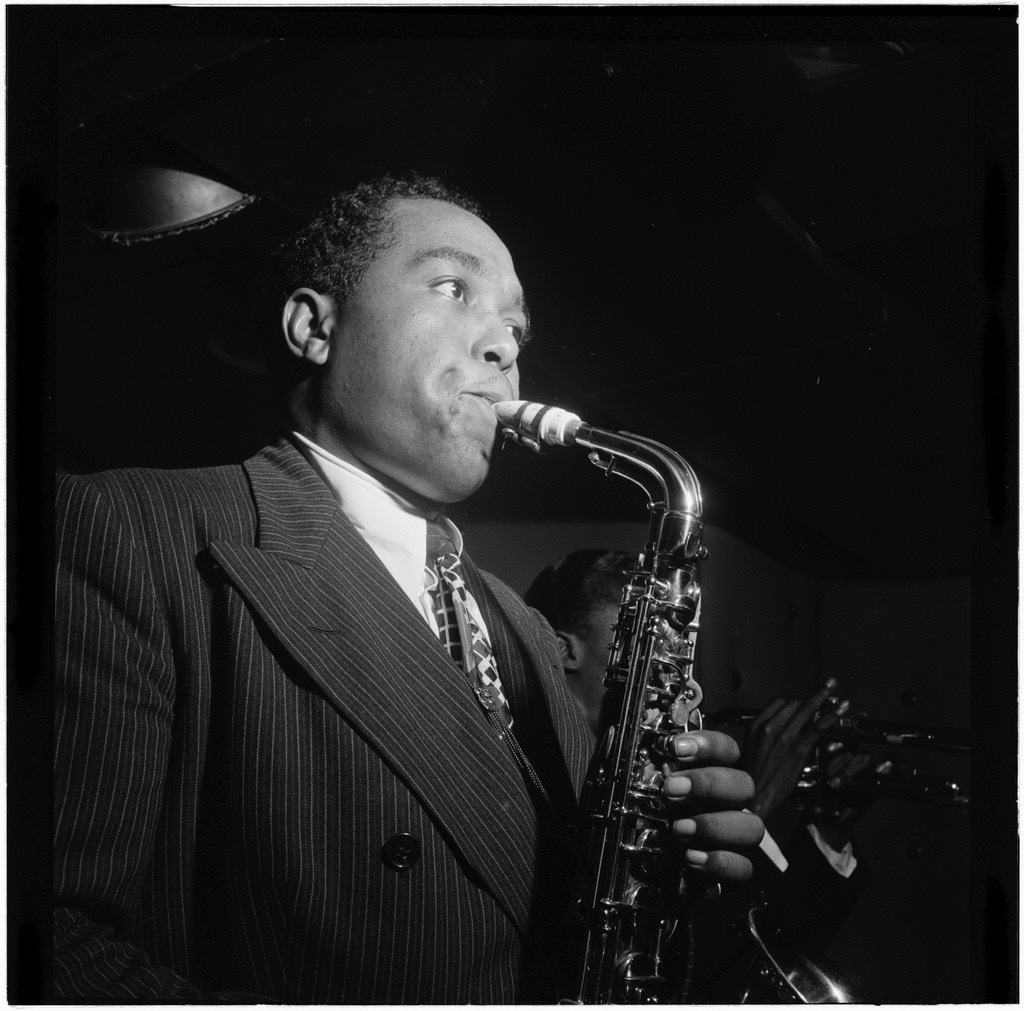 The only child of Charles and Addie Parker, Charlie Parker was one of the most important and influential saxophonists and jazz players in history.

When Parker was still a child, his family moved from Kansas City Kansas to Kansas City, Missouri, where jazz, blues, and gospel music were flourishing. His first contact with music came from school, where he played baritone horn with the school’s band. When he was 15, he showed a great interest in music and a love for the alto saxophone. Soon, Parker was playing with local bands until 1935, when he left school to pursue a music career.

From 1935 to 1939, Parker worked in Kansas City with several local jazz and blues bands from which he developed his art. In 1939, Parker visited New York for the first time, and he stayed for nearly a year working as a professional musician and often participating in jam sessions. The New York atmosphere greatly influenced Parker’s musical style.

In 1938, Parker joined the band of pianist Jay McShann, with whom he toured around Southwest Chicago and New York. A year later, Parker traveled to Chicago and was a regular performer at a club on 55th street. Parker soon moved to New York. He washed dishes at a local food place where he met guitarist Biddy Fleet, the man who taught him about instrumental harmony. Shortly afterward, Parker returned to Kansas City to attend his father’s funeral. Once there, he joined Harlan Leonard’s Rockets and stayed for five months. In 1939, Yardbird rejoined McShann and was placed in charge of the reed section. Then, in 1940, Parker made his first recording with the McShann orchestra.

During the four years that Parker stayed with McShann’s band, he got the opportunity to perform solo in several of their recordings, such as Hootie Blues, Sepian Bounce, and 1941 hit Confessing the Blues. In 1942, while on tour with McShann, Parker performed in jam sessions at Monroe’s and Minton’s Playhouse in Harlem. There he caught the attention of up-and-coming jazz artists like Dizzy Gillespie and Thelonious Monk. Later that year, Parker broke with McShann and joined Earl Hines for eight months.

The year 1945 was extremely important for Parker. During that time he led his own group in New York and also worked with Gillespie in several ensembles. In December, Parker and Gillespie took their music to Hollywood on a six-week nightclub tour. Parker continued to perform in Los Angeles until June 1946, when he suffered a nervous breakdown and was confined at a state hospital. After his release in January 1947, Parker returned to New York and formed a quintet that performed some of his most famous tunes.

From 1947 to 1951, Parker worked in a number of nightclubs, radio studios, and other venues performing solo or with the accompaniment of other musicians. During this time, he visited Europe where he was cheered by devoted fans and did numerous recordings. March 5, 1955, was Parker’s last public engagement at Birdland, a nightclub in New York that was named in his honor. He died a week later in a friend’s apartment.

Charles “Yardbird” Parker was an amazing saxophonist who gained wide recognition for his brilliant solos and innovative improvisations. He was, without a doubt, one of the most influential and talented musicians in jazz history.

‘He’ll make your head explode’: sax stars on the genius and tragedy of Charlie Parker

Please see the full Guardian article here. He was nicknamed Bird and he soared in his music – if not in his life. For the centenary of the saxophonist who......
19 November, 2020 / No comment

“Summertime” official music video by Charlie Parker. Subscribe and ring the bell to never miss an update from this channel. Click here to see the video....
21 September, 2020 / No comment

NY Times- Charlie Parker at 100: What to Read, Watch and Dig

Please see the full NY Times article here. How to celebrate the groundbreaking saxophonist — who died at 34 in 1955 — via books, albums, tributes and more. Charlie Parker’s......
26 August, 2020 / No comment